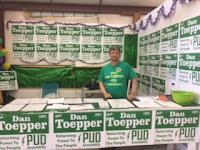 As the General Election cycle is in full swing, I am calling on supporters of my candidacy to contact me if they can help with the campaign. There is a lot of work to be done so that we will be successful.
Fundraising is also a priority to generate the funds for advertising and a countywide mailing. If you can donate to the campaign, it will be greatly appreciated.

Getting information out to the voters about the PUD, the PUD Commissioner race and the issues surrounding them is imperative over the next six to eight weeks.

I need your help. Thank you in advance.